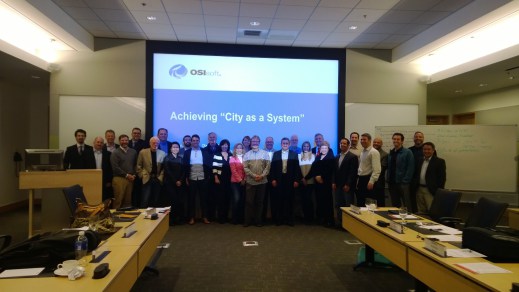 Feb. 19-20, Cleantech San Diego, OSIsoft, Qualcomm, Downtown San Diego Partnership, San Diego Gas & Electric (SDG&E), and the Port of San Diego, visited Microsoft Headquarters in Seattle, Wash. for a two-day meeting to discuss “The City as a System” project. Smart City San Diego launched this pilot project in conjunction with the Downtown San Diego Partnership, to produce real-time energy usage analytics, provided by OSIsoft, to building owners and operators. The software will then recommend energy efficient behaviors based on the data. Ultimately the project will allow buildings to be connected as a single operational system, which will lower the individual and aggregate energy consumption and establish critical load reduction. Once proven, the goal is to expand and replicate this model more broadly across the region and other markets.

Cleantech San Diego Executive Chairman Jim Waring opened the meetings with an overview presentation of “The City as a System” project. Waring highlighted key stakeholders in the room from across San Diego and encouraged those with the capabilities and resources to push the project forward to take advantage of the technical software and hardware that is already in use at Microsoft. He emphasized that if “The City as a System” is implemented in the heavy energy use region of San Diego successfully, the potential energy savings will be monumental. Not only does this project directly affect San Diego’s carbon footprint, but it is also intensely budget driven.

Following Waring’s presentation, San Diego Mayor Elect Kevin Faulconer joined the meeting via phone to express his support, stressing that now is the time for San Diego to launch “The City as a System,” and that San Diego can collaborate in our shared goal of energy efficiency. Mayor Elect Faulconer stayed on the line to answer questions from the group and further explained his personal goal of deploying a real-time data infrastructure that can quantify, measure, and report San Diego’s energy efficiencies and deficiencies.

San Diego County Supervisor Dave Roberts added that each city must work together with the county as a whole to succeed in this project. Representatives from Qualcomm, Downtown San Diego Partnership, SDG&E, and the San Diego Airport Authority all agreed that this is a collaborative project that could be game-changing — but it needs a team leader — a mayor in Faulconer — to drive it.

Joel Cherkis of Microsoft added that this group from San Diego is rare due to its successful collaboration with both the private and public sectors, policy makers, institutions, and utilities. OSIsoft went on to describe the software and data collection properties and capabilities of “The City as a System” project. It was underscored that software issues will not be a challenge, instead changing human behavior is what could slow progress.

Cherkis of Microsoft continued to describe how the goals of Microsoft align well with those of the people in the room and that of San Diego. In addition, Microsoft described their City Next initiative and talked about European cities that are currently investing in the amenities that constitute a Smart City. Microsoft emphasized that being a Smart City requires many different factors, including plans around education, energy, water, government, tourism, building infrastructure, taxes, and finances. Although Smart Cities were initially started with the goal to save money, they have evolved to encompass safety, accessibility, fluid transportation, and everything that creates an attractive city to civilians. Cities are the hearts and souls of our nation. They are where we live, work,  and play – why shouldn’t they be smart? Microsoft concluded that San Diego should lead the way nationally and internationally when it comes to true smart cities.

Later in the day, the group from San Diego was able to take a real-time look at the operating center that controls the Microsoft campus. The tour spurred a discussion with Steve Johnson, Director of Economic Development for the City of Seattle, who described how their mayor’s office has collaborated with Microsoft to make Seattle one of the smartest cities in the nation. Johnson  reiterated that it’s not the technology but human behavior that is hard to reach. Brian Geller of Seattle 2030 district described that being a separate entity and not an NGO allows easier compliance when it comes to data sharing, which may ease the human behavior aspect.  In lieu of a subway system the majority of citizens continue to use public transportation more so than any other mode of transportation in Seattle. Although there was a learning curve and it took grant money, pilots, and proof of results to get there, it’s clear Seattle residents  want to be part of a smart city. Incentive programs and outreach alongside general funds and  grants have allowed for a building pilot program that is currently underway. Johnson said  Seattle wants to be the innovation hub for energy efficiency, sustainability, and economic development in the areas of emerging companies. He concluded by stating that the key to economic growth is good policy and reaching out to smaller companies that are thriving on their own to make sure they have what they need to grow and succeed.

In conclusion, day one has created actionable discussions and genuine excitement around San Diego’s “The City as a System” project. But it’s clear that “Smart City” is happening all around the globe and San Diego is already behind when it comes to deployment. The first day of the meeting brought to light the who, what, and how’s of the project plan.

On day two of the meetings Jim Waring of CleanTECH San Diego opened the morning up by asking the room to reflect and report on their impressions about what’s been exciting and inspiring thus far. In addition, he asked the room to list opportunities, goals, and possible barriers to their respected companies achieving “The City as a System.” The discussion began with  SDG&E describing that San Diego needs to utilize the cross functional collaboration Microsoft is willing to dive into with regard to products, services, and technologies. Jason Ellis of Qualcomm added that solutions are viable and available if the problems are aggregated and targeted. Ellis added that the telecom infrastructure and technology exists but it’s not quite clear how to adapt the current technology for the proposed issues and problem areas. Ellis stressed that Qualcomm wants to do this sort of work in San Diego — Qualcomm’s home town.

On a smaller scale,  Supervisor Roberts added that even monitoring fire extinguishers as they do here at the Microsoft campus can save incredible amounts of money. The fire extinguisher example is small but requires only a moment to understand that it takes multiple personnel, man hours, and vehicles on the road to monitor San Diego’s fire extinguishers. Supervisor Roberts added that this is a political, leadership, and policy issue that should not hinder us as a city anymore. The San Diego Airport Authority voiced that San Diego needs to be collaborative, innovative, and understand that the county and the city must work together by sharing information. Again, laws, policy, and codes may be the key issues to hindrance when it comes to moving forward. Kris Mitchell of the Downtown San Diego Partnership added that downtown wants to be the the pilot program site for “The City as a System” because the cohesiveness is there.

Dave Roberts from OSIsoft described that the data being extracted from the building’s will always be the building’s owners and operators data. The data sharing agreement the City of San Diego agrees will also dictate the security of typical and non-typical data. However, certain entities expressed that they are legally obliged to share all data that runs through their respected companies. Roberts went on to show examples of what can be done with the data infrastructure once operations are in place.

Carnegie Mellon’s Bertrand Lasternas stated that the smart infrastructure in San Diego has a key partner in Carnegie Mellon when it comes to pilot program examples, funding, and achieving the wide data set to create meaningful analysis. Lasternas went into detail about how to operate and control the data infrastructure via Microsoft dashboards, analysis, and exportation. Carnegie Mellon is a great example of how to get a project like “City as a System” off the ground and run the day-to-day operations.

The following discussion was based around executive collaboration and actionable deliverables. Waring headlined the discussion on funding and how to deploy this project. This meeting will construct the framework from the recent exchanges with the goal of an executable operational business plan. The question is where does the funding come from? Is the answer a Washington, D.C. organization for profitability purposes or through various philanthropic organizations? This all depends on our collective work in San Diego. Laura Cosio-Azar of the City of San Diego stated that the City of San Diego should use their own facilities in this project to be an example and a show-stopper. The main issue is that we are currently a reactive, not proactive, city in many areas of our infrastructure. The only foreseeable challenges will come in the form of regulatory and compliance issues. The housing commission stated that this data could possibly effectuate rental rates with the end goal in utilizing federal funds. These systems can save monies on the rental sides, create more units, and impact the budget in a massive way. The city also expressed that the multiple energy management and access control systems would allow astronomical time management savings. The most remarkably attractive aspect of the project is that of the software’s ability to predict future and current issues and then automatically prioritize them in order of cost and savings. The significance and importance of the technology that already exists and the human behavior that must follow could not be highlighted enough.

Bill Mitchell of Microsoft added that we are driving the dialogue and that we can work together on this. Mitchell added that he is willing to invest personally in this project based on the capabilities he sees San Diego posses by way of its stakeholders. Multiple Microsoft personnel stressed that ours is a unique, attractive, and positive group that can make this vision happen. Again, the technology is here, but it takes the right personnel in the correct positions to drive this type of project forward. In the end, the overwhelming message was that San Diego must not get distracted because “The City as a System” is the future.

In conclusion, the meetings were very successful in magnifying the gigantic opportunity for the City of San Diego and “The City as a System.” Microsoft is on board to be part of this bigger story that they can replicate around the world. With action items and a Mayor in place, San Diego is willing to embrace the project. We say farewell to Seattle and thank Microsoft and OSIsoft for housing the meetings and providing all accommodations.