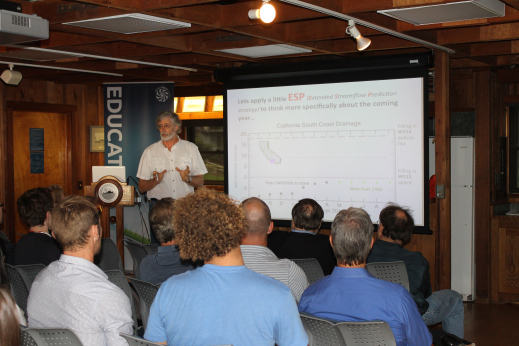 On June 2, guests of Cleantech San Diego gathered on the Scripps Institution of Oceanography campus for a timely discussion with top climate scientists about the powerful weather phenomenon El Niño and how it impacts our region. The program included presentations from three El Niño experts who explained the basics of the weather pattern and shared insights about the likelihood of an El Niño event occurring in San Diego this year.

Scripps Research Marine Physicist Tim Barnett provided a forecast and projected that El Niño may be on its way based on the discovery of a Yellowfin Tuna caught recently off Alaska. This unprecedented early appearance of the fish at such a northern location indicates a rise in sea surface temperatures, which is an identifying characteristic of El Niño. “I’m going with what the fish think,” he said.”

Scripps Research Associate Michael Dettinger talked about the effects El Niño has on precipitation and hydrology in California. His analysis shows San Diego has roughly a 15% chance of correcting the drought deficit for 2014-15, and this would require an El Niño of record strength.

Scripps Research Meteorologist Dan Cayan shared information on the coastal effects of El Niño, including sea-level rise. The highest sea levels and active waves are seen during El Niños; abrupt changes which pose a threat to coastal infrastructure, businesses, and homes, especially at high tides. San Diegans can expect a much smaller beach during winter in an El Niño year, and even more so in future decades as sea level in California is expected to rise 1 meter by 2100.

The event was hosted by Cleantech San Diego, Scripps Institution of Oceanography, and Procopio.