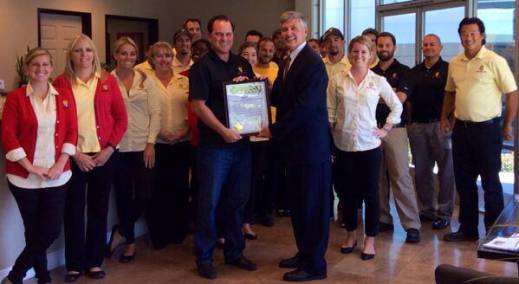 San Diego County Supervisor Dave Roberts, representing the third district, presented the Proclamation to Sullivan Solar Power at their local headquarters in Mira Mesa on June 30. The proclamation certificate was signed by all five San Diego County Board of Supervisors.

“The entire board was very supportive of this (proclamation),” said Roberts, “We don’t usually honor businesses that are turning 10 years old but this truly has been a decade of growth and excellence.”

The declaration states that the County of San Diego is committed to recognizing and honoring those organizations that are dedicated to the best ideals of public service, and Sullivan Solar Power is one such worthy company.

“Today’s Proclamation in naming June 30th Sullivan Solar Power Day was a surprise to our entire team, and probably the most honorable moment I have had since starting the company,” said Daniel Sullivan, founder and president of Sullivan Solar Power. “We appreciate the board’s leadership and support for solar power and our vision of putting rooftop solar on every home, business and institution in our realm of influence to promote a sustainable world for future generations.”

Sullivan Solar Power was founded by Daniel Sullivan in 2004 with only $2,500 in the bank and a pick-up truck while living out of a client’s garage. Sullivan started his company with a vision to change how his region generates energy, to assist in transitioning the world from dirty, foreign fossil fuels to clean renewable energy.

Most recently, the company has completed solar projects at UC San Diego, San Diego State University, and the City of Chula Vista. Sullivan Solar Power has been noted for its philanthropic work in the community, and has played an active role in supporting and enhancing solar-friendly policies and legislation through California.

“I know this is a phenomenal industry and people like you who provide leadership, not only for your business, but for the industry, is really appreciated,” concluded Roberts.