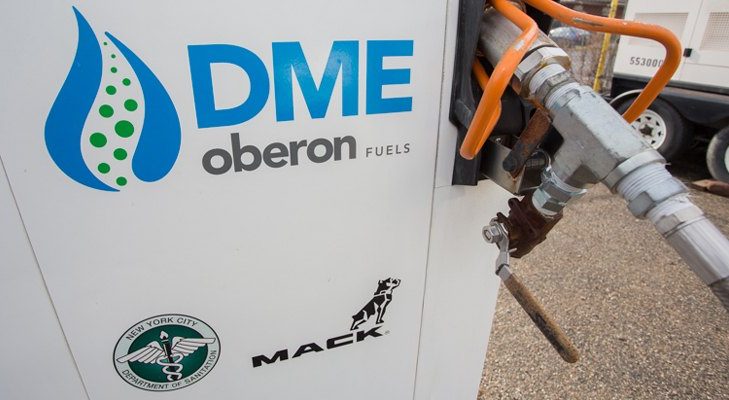 Cleantech San Diego member Oberon Fuels, producer of clean-burning dimethyl ether (DME) transportation fuel, has begun production of the first-ever renewable DME (rDME) in the United States, and the only current commercial production of this molecule in the world. Because rDME’s properties allow it to cost-effectively store and transport renewable hydrogen, this milestone unlocks Oberon’s ability to reduce emissions from transportation today, while accelerating the development of the hydrogen economy and a net-zero carbon future.

As part of a $6 million project funded in part by a grant from the California Energy Commission, Oberon is converting waste methanol into rDME at its upgraded facility in Brawley, Calif. It is the first time this feedstock has been used to make rDME at commercial scale. In addition to waste methanol, other potential feedstocks include: biogas from dairy waste, food wastes, agricultural waste, as well as excess electricity and CO2, resulting in ultra-low carbon to carbon-negative DME.

“This is a critical step on the path to decarbonizing the transportation sector,” said Elliot Hicks, Chief Operating and Technology Officer and an Oberon Fuels co-founder. “Our innovative approach uses waste resources to create a flexible molecule that can reduce emissions from fossil fuels, as well as create entirely new, super-clean fuels.”

Renewable DME has multiple pathways to reducing the carbon footprint of the transportation sector: as a diesel replacement, as a blend with propane and as an energy-dense, cost-effective way to move renewable hydrogen. rDME can help overcome some of the biggest barriers inhibiting the widespread use of hydrogen for transportation fuel, including: access to renewable feedstocks; modular, scalable production; and energy-dense, cost-effective storage and transport. Once delivered, rDME can be converted to renewable hydrogen at the point of use.

DME is a hydrogen-rich molecule that handles like propane, or liquefied petroleum gas (LPG). It can be produced at or near renewable feedstock sources using Oberon’s modular production technology. This novel approach to renewable hydrogen production promises similarities to the influence that distributed, rooftop solar has had on decentralizing industrial power generation.

Moreover, because rDME is compatible with LPG, it requires minimal modifications to the existing global LPG distribution network and workforce, which have been safely handling and transporting similar molecules for more than a century.

“As one of the longest-standing propane companies in the United States, Suburban Propane is committed to offer our time-honored network, expertise and infrastructure to support Oberon Fuels in leading the way towards the future of our industry,” said Michael Stivala, President and Chief Executive Officer of Suburban Propane Partners, L.P., which acquired a 39 percent equity stake in Oberon Fuels in 2020.

“Oberon’s production of renewable DME is not only a milestone for the company, it’s also a breakthrough for the global LPG industry as we seek new approaches to meet increasing customer and regulatory demands for cleaner fuels. Propane is already known for its versatile, cost-effective and clean burning attributes. Given the compatibility of these two molecules, we can immediately offer an even cleaner alternative for the transportation sector and beyond.”

Stivala added: “Additionally, the fact that we can use today’s propane infrastructure to move such a hydrogen-rich molecule that can become the hydrogen fuel of the future is both exciting and critical to our efforts to be innovative in achieving the goals of lowering carbon emissions.”

The rDME breakthrough has gotten the attention of key government officials in California.

“The spirit of innovation and perseverance is strong in the Imperial Valley,” said Assemblymember Eduardo Garcia (D-AD 56), a member of the powerful California Air Resources Board.

“Oberon and our community partners, including Imperial County Workforce and Economic Development, the Imperial Valley Economic Development Corporation, the operations team at the plant, and the local workers who labored on the upgrade, have shown us what is possible when we work together. We celebrate the completion of this milestone, and look forward to the utilization of renewable DME towards achieving our emission reduction goals and the role our region can play in powering vehicles across the state,” Garcia said.

“By achieving this important milestone, we can turn our focus to getting rDME in the hands of customers to reduce the carbon intensity of propane and diesel fuels,” said Bipin Patel, vice president of engineering at Oberon Fuels. “More importantly, we will be able to leapfrog today’s energy-intense, fossil-driven approaches to renewable hydrogen production from a variety of wastes and other renewable sources to further deliver on our mission of decarbonizing transportation.”