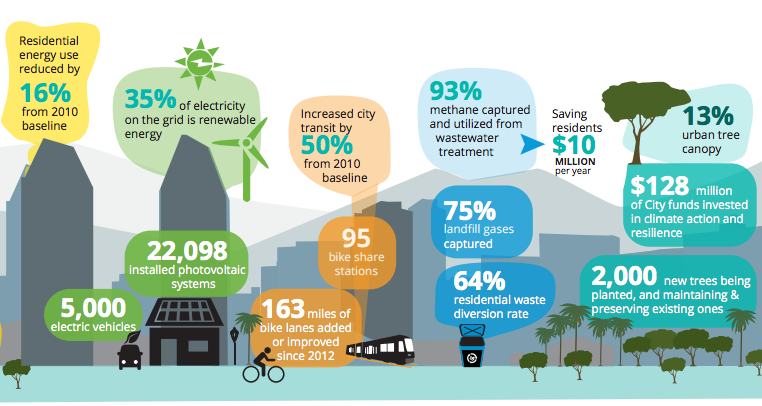 The U.S. Environmental Protection Agency (EPA) has ranked the City of San Diego as the eighth largest green power user in the country in its annual list recognizing agencies for generating power from alternative energy sources, including solar, landfill gas, hydro-electric, and wastewater methane energy systems.

“We’re constantly looking for new ways to lead by example and use innovative technology to expand our use of renewable energy,” said Mayor Kevin L. Faulconer. “We’re marching toward our goal of 100 percent renewable energy and this ranking reflects the significant progress San Diego is making to build a cleaner and more sustainable future for the next generation.”

San Diego is among the best in the country among the 1,400 agencies surveyed within the EPA’s Green Power Partnership, a voluntary program that encourages organizations to use renewable energy production as a way to reduce environmental impacts.

“By making the choice to use clean, renewable energy, the City is more sustainable,” said Environmental Services Director Mario Sierra. “Using green power is a sound business decision and an important tool in reducing one’s carbon footprint in the fight against climate change.”

Increasing the use of clean, renewable energy sources will help meet the ambitious goals in the City’s Climate Action Plan, which calls for using 100 percent renewable energy citywide and cutting greenhouse gas emissions in half by 2035.

In recent years, the City has focused on increasing its use of renewable energy sources, as well as installing and retrofitting equipment that will reduce the total energy load required to supply energy and reach its renewable energy goals faster, including:

“We are coordinating our efforts with several departments to implement several green power projects that will benefit the City in many ways in addition to the energy savings,” said the City’s Environmental Services Department Deputy Director Jack Clark.

The City’s Environmental Services Department, in particular, is working toward achieving a legacy of energy efficiency. Measures include: